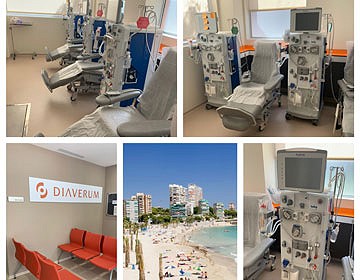 1.  Torremolinos Torremolinos is located on the Costa del Sol, on the western shore of the bay of Malaga, behind the mountain range Sierra de Mijas.  The main feature of Torremolinos is the beaches.  It has almost 7KM of coastline.  The unit is conveniently located for people staying in Torremolinos and the neighbouring resorts of Benalmadena and Fuengirola.  The unit accepts the EHIC and dialysis is available every day except Sunday with 30 dialysis chairs all equipped with TV screens and free Wi-Fi.

2.  Pineda de Mar Pineda de Mar has a long sandy beach and a wide range of accommodation, cafes, terraces and restaurants.  Resorts close by include Calella, Santa Susanna and Malgrat de Mar.  Opened in 2012 the unit has 30 machines all equipped with their own TV and free Wi-Fi, the unit accepts the EHIC and offers dialysis every day except Sunday.  Transport is provided from certain resorts

3.  Torre del Mar Located at the most eastern part of the province of Malaga one can find the beautiful region of la Azarquia.  With its rocky coast, the region is crowned with impressive mountains of the Sierra de Almijara endowed with an excellent heritage, rich culture and popular traditions.  The dialysis centre is close to the beachfront and is very convenient for holidays in the Nerja area  The unit accepts the EHIC and dialysis is available every day except Sunday.

4.  Oropesa del Mar Located along the Mediterranean Sea Coast, you can count upon many different beaches and coves all with mountain backdrops of the Sierra.  The dialysis unit accepts the EHIC, equipped with 20 machines all with their own TV and free WIFI and refreshments.

5.  Barcelona - Nephros unit With 1.7 million inhabitants, Barcelona is the second most populated city in Spain.  The Catalonian capital is a cosmopolitan Mediterranean city with a rich historic-artistic heritage and an important cultural wealth. It is home to one of the most important Mediterranean ports, Barcelona is an enchanting seaside city with boundless culture, fabled architecture and a world-class drinking and dining scene.There are several units situated within Barcelona that accept the EHIC, dialysis is available every day except Sunday.  The Nephros clinic is only 2KM from the Parque Guell

6.  Gandia (Valencia) Valencia is a privileged destination being known not only as a city but also a seaside resort, just 15 minutes away from downtown you can find the beaches of Las Arenas, Malvarrosa and El Cabanal, presented with blue flags and awarded with the tourist Q for quality.  We have 6 units across the Valencia region all accepting the EHIC card.  Gandia is the second largest city in the province of Valencia nestled on the Costa del Azahar. It has been a hotspot for Spanish tourists for years, but is becoming more popular with foreign visitors as its charms become better known.

Situated around two kilometres from the beach, the town of Gandia has successfully managed to separate its tourism-side from daily life. The city is amongst Spain’s main orange growing region and produces some of the most delicious oranges in Europe. The unit in Gandia, opened in 2018 and features 30 dialysis stations (5 of these are dedicated to positive patients) all equipped with TV screens and free WiFi.

7.  Nefroclub (Valencia) The Nefroclub dialysis unit first opened in 1977, but relocated in December 2018 to a bigger facility.  Featuring 30 dialysis stations, over 5 rooms, all stations feature TV’s and free WiFi.  The unit is well located for exploring Valencia city, only a short journey from the centre of Valencia.

8.  Villagarcia de Arosa (Pontevedra) Galicia, and in particular the towns close to “Santiago de Compostela” and its airport, have become increasingly popular with British and American holiday makers over recent years.  This part of the Iberian Peninsula offers a taste of “real” Spanish culture, taking you away from the tourist frequented Costa’s and into a greener and more culturally defined part of the country. Here you can escape the commercialism that has tainted so many other European holiday destinations and explore a region rich in history,tradition, culture and architecture.  We have units in A Parda (Pontevedra), Villagarcia De Arosa (Pontevedra) and Santiago de Compostela. All accepting the EHIC for dialysis.

9.  Alicante Of all Spain’s mainland provincial capitals, Alicante is the most influenced by tourism, thanks to the nearby airport and resorts. Nevertheless it is a dynamic, attractive Spanish city with a castle, old quarter and long waterfront.   Impressive galleries and a chic marina give this city a cosmopolitan atmosphere all year round. We have a unit close to Alicante centre, approximately at 5-8 minute taxi ride from the Marina area.  We also have a unit in San Vicente del Raspeig both accept the EHIC and opened at the end of 2018 and are brand new facilities.

10.  Palma - Mallorca The island of Mallorca is the largest, the best known and most popular of the Balearics. Visitors can wander through Palma’s gothic quarter and wonder at its cathedral, laze on golden sandy beaches or simply enjoy its natural beauty.  The island’s 500km of coastline offers a succession of lovely coves, beautiful sandy beaches and secluded bays with some extraordinary caves to explore: notably the Coves del Drac near Porto Cristo. Together with a mild climate and a rich cultural history, it really does provide a delightful holiday destination.  We have units that accept the EHIC in Palma, Inca both units opened in 2017, and feature individual TV’s with WiFi.

For further information, or to book dialysis Spain contact our office on 01509815999, or email info@holidaydialysis.co.uk